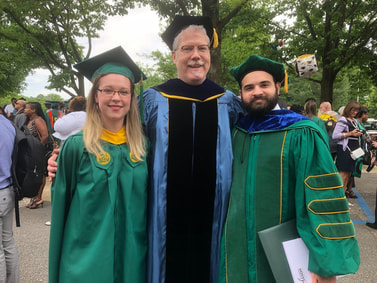 May 17, 2019
Today was the Spring Commencement at George Mason University! Dr. Carlos M. Peredo was hooded at the event, and Margot D. Nelson received her Master's degree. Congrats to our Uhen lab graduates!
May 6, 2019
"When Whales Walked: Journeys in Deep Time", features top paleontologists studying Earth's majestic creatures, including our own Dr. Mark Uhen! The special premieres on PBS June 19th at 9/8c, and the trailer can be found here. In addition, the National Museum of Natural History will be hosting a special screening of the special on May 21st! Information about the NMNH event can be found here.
April 17, 2019
Congratulations to Margot D. Nelson, who passed her thesis defense, titled "A New Platanistoid (Cetacea, Odontoceti) from the Nye Formation of Oregon"! She will be pursuing her PhD at George Mason University.
March 21, 2019
Congratulations to Carlos M. Peredo, who passed his doctoral defense, titled "From Teeth to Baleen: Morphological Adaptations Associated with the Loss of Teeth and the Evolution of Baleen in Mysticete Cetaceans"! He has accepted a position at University of Michigan as a member of the Michigan Society of Fellows. His postdoctoral research project is titled "Examining the evolutionary origins of sensory systems in marine mammals". We know he will go on to do great things! 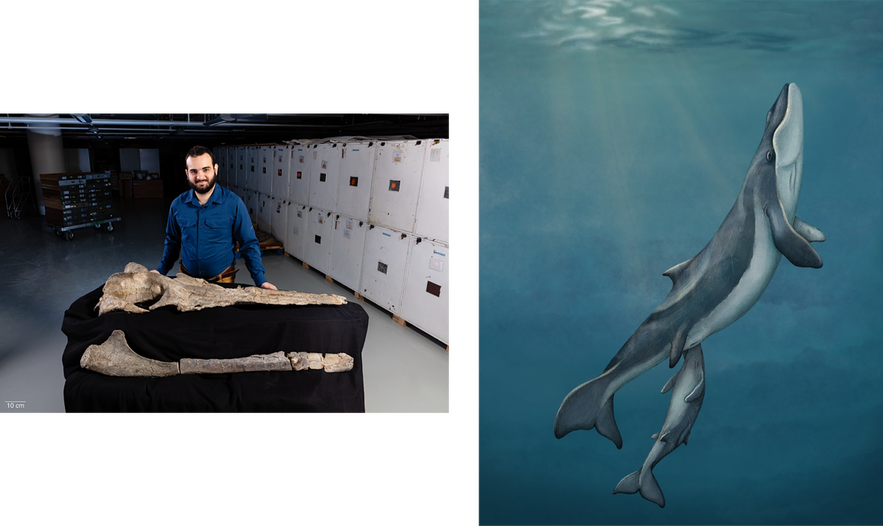 November 29, 2018
We are excited to announce a new mysticete Maiabalaena nesbittae, a 33 million year old baleen whale from Oregon with neither teeth nor baleen. Maiabalaena ​would have been a capable suction feeder. This specimen was published by Carlos M. Peredo, with Nick Pyenson, Christopher Marshall, and Mark Uhen! Maiabalaena means "mother whale", alluding to its phylogenetic position as basal to baleen-bearing mysticetes; the specific epithet honors Dr. Liz Nesbitt, a paleontologist who has made invaluable contributions to the paleontology of the Pacific Northwest. Pictured below are Carlos with the holotype specimen (left) and a reconstruction of Maiabalaena​ (right) by Alex Boersma.

Carlos M. Peredo is presenting a talk titled "From teeth to baleen: tooth loss precedes the origin of baleen in whales".

Margot D. Nelson is presenting a talk titled "A new platanistoid (Cetacea, Odotoceti) and its place in the evolution of the Squalodelphinidae and the Platanistidae", her thesis work with Dr. Uhen. 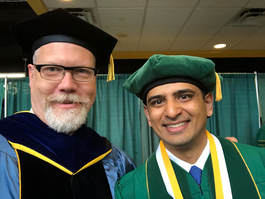 May 2018
Dr. Advait Jukar successfully defended his dissertation, titled "Temporal turnover in late Neogene and Quaternary Mammal Assemblages", and has graduated from George Mason University. He accepted the Deep Time - Peter Buck Fellowship at the Smithsonian National Museum of Natural History.
August 2017
1) Uhen Lab is in Calgary for SVP 2017

Mark D. Uhen is presenting a talk on "Latitudinal effects on the distribution and diversity of fossil marine mammals".

Carlos Peredo is presenting a talk titled "A new kentriodontid (Odontoceti) from the Pacific Northwest sheds new light on the temporal and geographic range of the enigmatic dolphin family" This study was conducted by Carlos, Mark, and masters student Margot Nelson

Advait Jukar is presenting a talk on "Late Quaternary extinctions in South Asia".

July 2017
Carlos Peredo is at the Burke Museum in Seattle studying fossil cetaceans from the Pacific Northwest
June 2017
Advait Jukar is at the Natural History Museum in London studying Neogene and Quaternary mammals from the Siwaliks of India.
October, 2016​
1) Advait Jukar and Carlos Peredo presented some of their dissertation research at the 76th annual meeting of the     Society for Vertebrate Paleontology in Salt Lake City, Utah. You can read their talk abstracts here.
​
​2) Loren Petruny successfully defended her masters thesis! She will be continuing at George Mason University as     a PhD student with Dr. Randall McBride.

August, 2016
1) Dr. Mark D. Uhen was awarded tenure at George Mason University! He is now an Associate Professor in the department of Atmospheric, Oceanic and Earth Sciences. 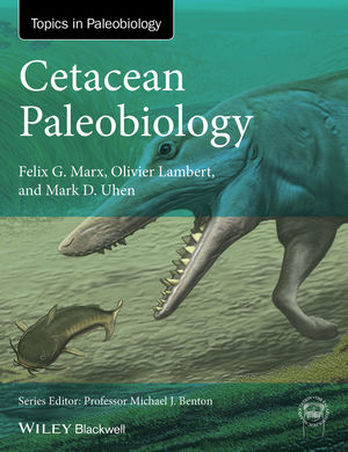 July, 2016
1) Carlos Peredo and Mark D. Uhen published a new paper on a new basal chaeomysticete (Mammalia: Cetacea) from the Late Oligocene Pysht Formation of Washington, USA. The new whale is named Sitsqwayk cornishorum. Sitsqwayk, in the native language of the Klallam tribe, stands for a powerful spirit "from far out in the water", and is said to bring great wealth. Cornishorum is the Latin plural for John and Gloria Cornish, who found the fossil. 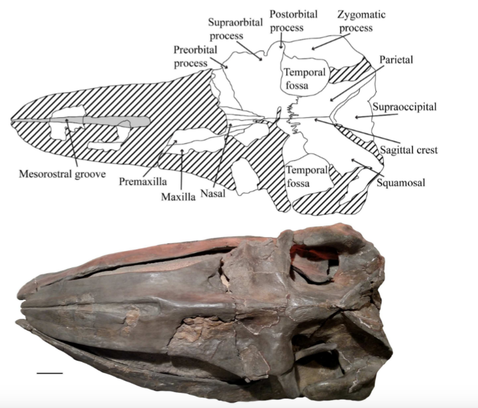 ​2) Carlos Peredo presented a talk on the morphological consequences of tooth loss in mysticetes, at the International Congress of Vertebrate Morphology, in Bethesda, MD.

3) Advait Jukar presented a poster on a novel method to estimate body mass in proboscideans at the International Congress of Vertebrate Morphology, in Bethesda, MD. 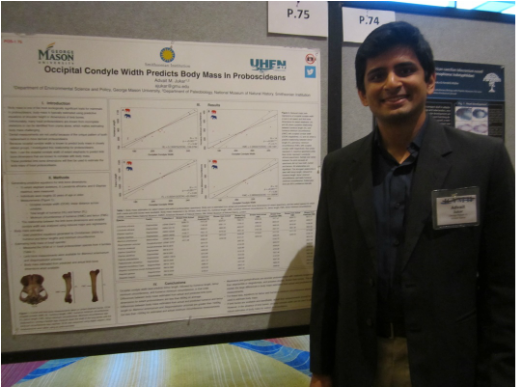 2) PhD Student Carlos Peredo, and Dr. Mark D. Uhen published a paper in Paleogeography, Paleoclimatology, and Paleoecology on the paleogeography of marine mammals during the Cenozoic. This publication was derived from Carlos' masters research.
Symposium on the Evolution of Marine Mammals honoring Guram Mchedlidze, Tbilisi, Georgia
Dr. Uhen is part of a team of marine mammal researchers who are organizing a symposium on marine mammals, honoring the internationally recognized Georgian paleontologist Dr. Guram Mchedlidze (1931–2009). The symposium will be held from the 29th of September to the 1st of October 2016 at the Georgian National Museum in Tbilisi, Georgia. The symposium will consist of both oral and poster presentations on topics related to the evolution of marine mammals.
October, 2015
Zygorhiza is here! The cast of Zygorhiza kochii from the Smithsonian Natural History Museum is now hanging in the Exploratory Hall atrium at George Mason University! Check out the news story here. 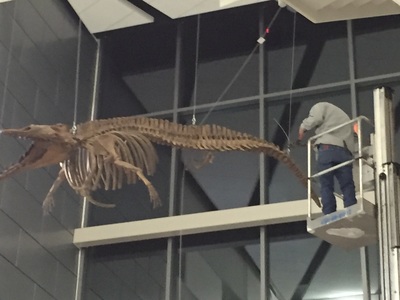 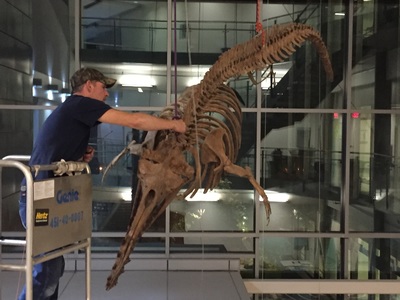 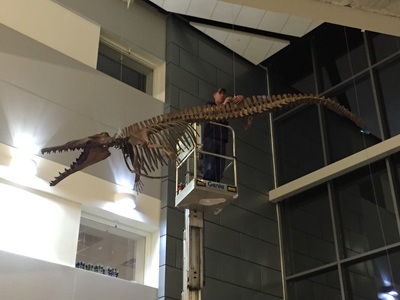 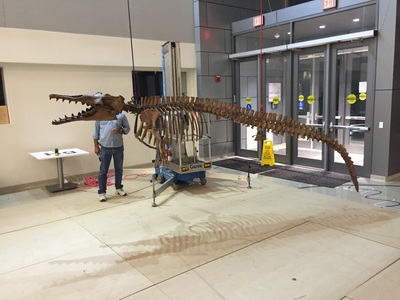 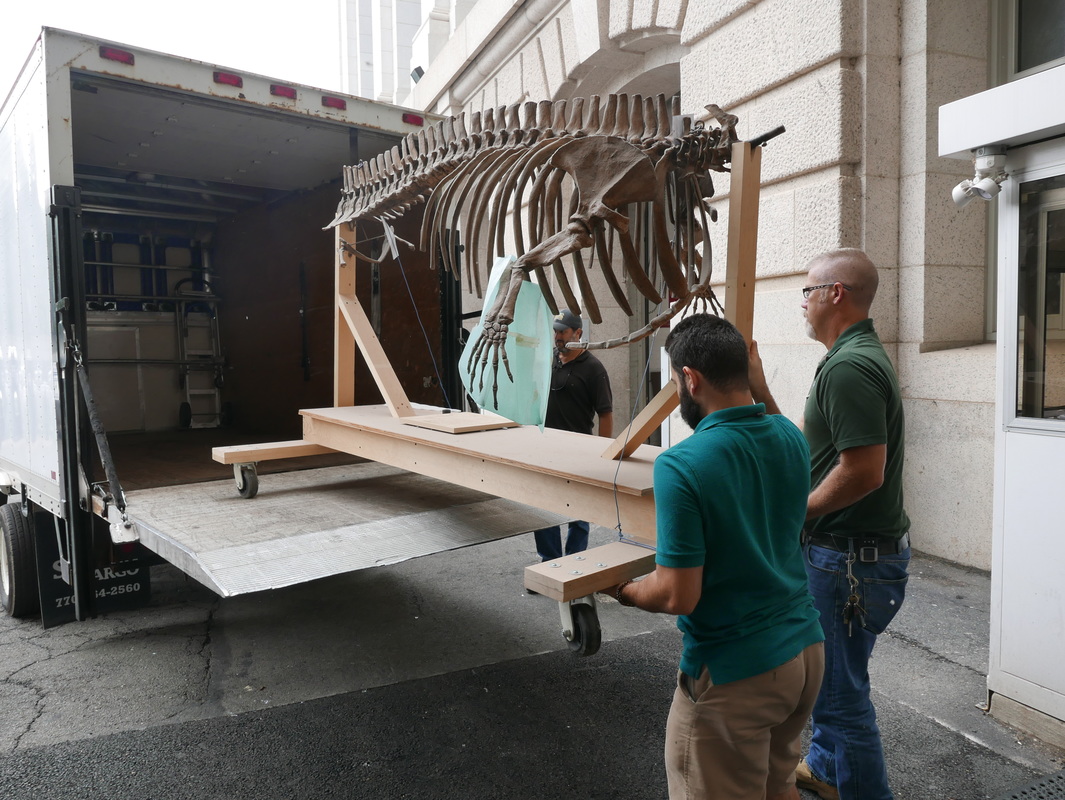 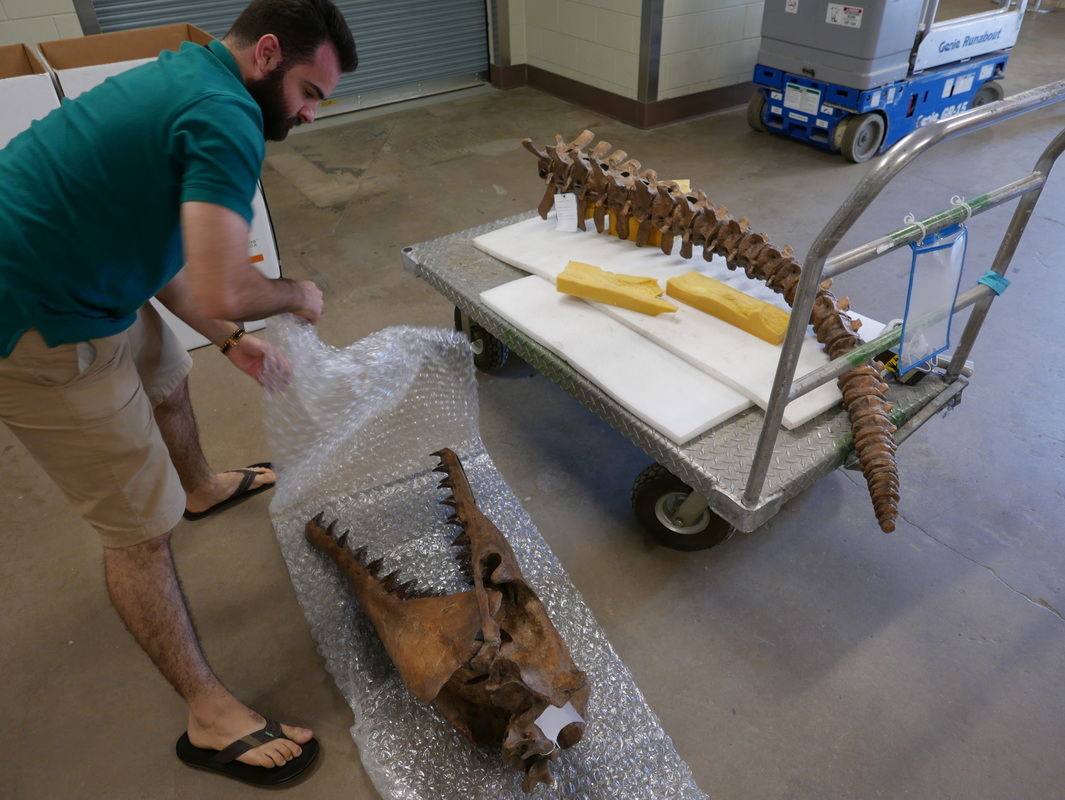 A cast of the skeleton of Zygorhiza kochii, a basilosaurid archaeocete whale from the Late Eocene of the Gulf Coast of the US was transferred to George Mason University from the US National Museum, Smithsonian Institution on Thursday, August 20. This skeleton will be hung in the atrium of the Exploratory Hall Lab Annex very soon! Watch this space for when you can see the skeleton in Exploratory Hall!

2) Dr. Mark Uhen, and colleagues received two NSF grants for Enhancing Paleontological and Neontological Data Discovery and for Building Interoperable Cyberinfrastructure (CI) at the Interface between Paleogeoinformatics and Bioinformatics.

3) Advait Jukar presented a talk at the 2015 Ecological Society of America Conference held in Baltimore. The talk was titled "Temporal turnover of mammal assemblages in response to climate change in different topographical landscapes"

4) Carlos Peredo presented a talk at the 2015 Ecological Society of America Conference held in Baltimore. The talk was titled "﻿Identifying and evaluating the role of paleogeography of marine mammal dispersal across ocean regions using beta diversity metrics﻿"

July, 2015
Dr. Mark Uhen, and colleagues were recently awarded a National Science Foundation Collaborative Research grant. The award will go to﻿wards improvin﻿g the Paleobiology Database (paleobiodb.org), a catalog of around 1.3 million fossil finds. Read the news report on the grant and what it will achieve here.

May, 2015
Uhen Lab student, Carlos Peredo successfully defended his M.S. Thesis defense. Carlos will continue on in the lab as a doctoral student.
November, 2014
Masters student Joseph Villari is a co-author on a paper on captive effects on the skull morphology of lions and tigers (Genus Panthera).
Hartstone-Rose, A., H. Selvey, J. R. Villari, M. Atwell, and T. Schmidt. 2014. The Three-Dimensional Morphological Effects of Captivity. PLoS One 9:e113437. 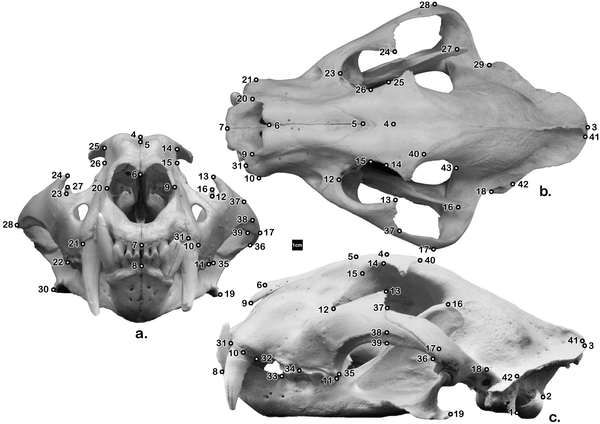 August, 2014
Foundations of Macroecology is available at the University of Chicago Press. The IMMPS NSF Research Coordination Network group edited this volume of classic papers in macroecology and added essays from group members and other leaders in the field. Be sure to check out the contributions from Mark D. Uhen on Evolutionary Dynamics and along with Jessica Theodore on Community Evolution and the Origin of Mammals by E. C. Olson. 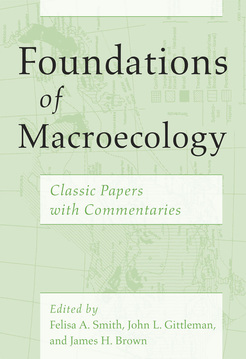 Uhen, M. D. 2014. New material of Natchitochia jonesi and a comparison of the innominata and locomotor capabilities of Protocetidae. Marine Mammal Science 30:1029-1066. 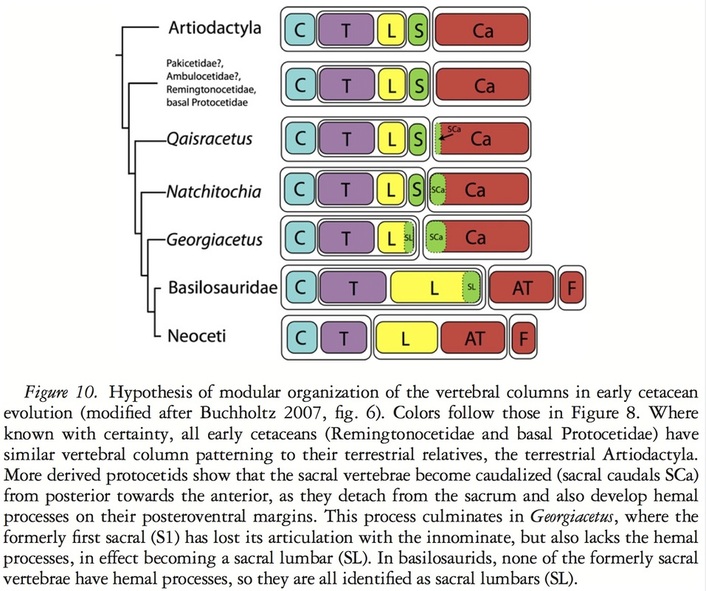 June 10, 2014
Members of the Uhen Lab begin an ongoing partnership with the Encyclopedia of Life, a freely accessible, trusted digital resource that gathers, generates, and shares knowledge about all life on earth. Individual entries were written for over one hundred species ranging from the Cambrian through the Holocene. Specific examples include Spinosaurus aegyptiacus, Smilodon fatal is, and Odobenocetops peruvianus.
June 2-4, ﻿2014
Mason, Smithsonian Institution, and Howard University host the Secondary Adaptations of Tetrapods to Life in the Water seventh triennial meeting at George Mason University. Researchers from around the globe converged on the Mason campus for three days of talks and tours about marine tetrapods of all sorts. Abstracts of all of the talks are available here. 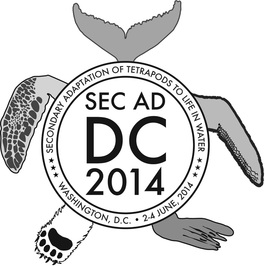 June 1, 2014
A new publication by Martin Pickford and Mark D. Uhen replaces the primate name Namaia with Notnamaia, due to preoccupation of the name by an ostracod.

May 21-23, 2015
Mason hosts the C4P RCN Paleobiology workshop at the Consortium for Ocean Leadership in downtown Washington, D.C.
April 16, 2014
Another new publication from the IMMPS NSF Research Coordination Network group on the evolution of maximum body size in mammals. 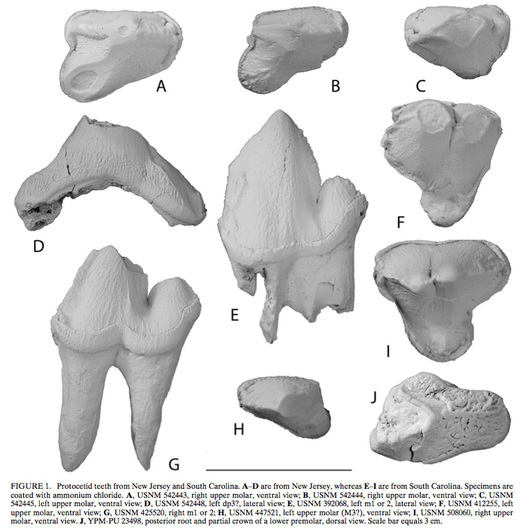